While I was in Finland for Åcon I took time out in Helsinki to take a look around the proposed facilities for the Helsinki Worldcon. Here is some video, which I hope will prove helpful to those of you considering your site selection votes. My thanks the Jukka, Eemeli and Otto from Finnish fandom, and Laura from the convention center, for taking me around the site.

These were all taken by walking around with my Flip, and YouTube has been complaining bitterly about them being shaky, but I have elected to keep them as they are. It’s art, you know. Also there’s quite a bit of moving in and out of areas with different lighting levels. I’m quite impressed with how quickly the Flip adjusted.

You may also want to check out this gallery of still photos from the same trip. And, of course, the Helsinki in 2015 bid site, which has more video.

We start out in the lobby of the Holiday Inn hotel, which will be the convention’s main headquarters. I measure the distance from the hotel to the convention center in Standlee Units (that’s the length of Kevin’s stride, which is the traditional unit of distance for Worldcons and is somewhere between a yard and a meter in length).

Next up is Room 101, one of the larger meeting rooms, which has been earmarked for Opening and Closing Ceremonies and Guest of Honor talks.

The exhibit halls were closed for renovation when I visited, but I look the opportunity to look around the lobby of the convention center and answer that important question: can I get cash easily?

Here is one of the smaller meeting rooms in the convention center.

In addition to the restaurant we saw in the convention center lobby there are two more in amongst the meeting rooms.

There are a lot more small meeting rooms attached to the hotel. These are on the 2nd and 3rd floors (by US numbering), but as we’ll see the hotel restaurant is on the 2nd floor, and of course there are elevators.

There is a dedicated “Exhibitors’ Lounge” which we think would make a great Green Room.

And a press office that might make a good newsletter office and/or fanzine lounge.

Finally, here’s a look at the executive suite on the top level of the hotel, which has a very nice sauna.

One of the limitations of the site is that the Holiday Inn won’t be able to accommodate all of the overseas visitors (though there should be plenty of rooms for everyone who needs to be on site). Also the convention center doesn’t have much in the way of fast food. However, there are plenty of hotel rooms available around the main railway station in Helsinki. trains are frequent through the day, and are available though most hours of the night. It is just one stop (10 to 15 minutes) to the convention center, and the city has promised to provide free transit passes (which would also work on the trams). In this video I walk from the railway station to the convention center, checking out fast food options along the way. The map below shows the route. I walk over the bridge from the station concourse into the area marked by the circle numbered “11”. The Holiday Inn is marked by the circle “10”. 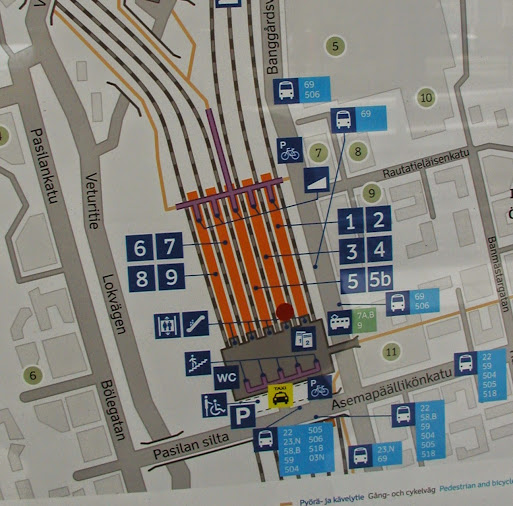 For beer and history lovers, here’s a look at one of Helsinki’s nicest pubs.

And finally a look around the area by the main railway station where all of the big hotels are.

If you have any questions about the location, please ask them in comments. I and/or members of the bid will do our best to answer them.