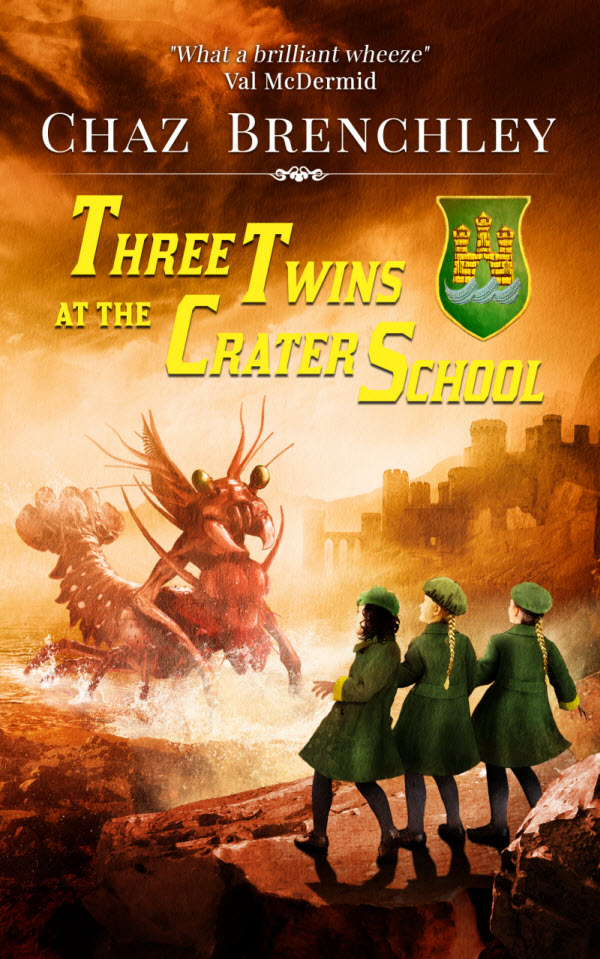 Today on social media I unveiled the cover for the first of Chaz Brenchley’s Crater School books. Three Twins at the Crater School introduces us to the eponymous school, and some of its staff and pupils. We also get to meet some of the Martian fauna which, as you can see from the cover, look pretty scary.

I have put the book out for pre-orders, and hopefully the links will be available tmomorrow, but Kobo are on vacation for Easter and you can never tell how long it will take Amazon to do anything. I will tweet as soon as links are availalble. In the meantime here is the promo blurb and some reactions from early readers. (eARCs are available.)

Mars, the Red Planet, farthest flung outpost of the British Empire. Under the benevolent reign of the Empress Eternal, commerce and culture are flourishing along the banks of the great canals, and around the shores of the crater lakes. But this brave new world is not as safe as it might seem. The Russians, unhappy that Venus has proved far less hospitable, covet Britain’s colony. And the Martian creatures, while not as intelligent and malevolent as HG Wells had predicted, are certainly dangerous to the unwary.

What, then, of the young girls of the Martian colony? Their brothers might be sent to Earth for education at Eton and Oxbridge, but girls are made of sterner stuff. Be it unreasonable parents, Russian spies, or the deadly Martian wildlife, no challenge is beyond the resourceful girls of the Crater School.

“For every fan of The Chalet School”
Farah Mendlesohn

“A rollicking good read from start to finish!”
Ellen Klages

“I wish I were a Crater School girl”
Marie Brennan

“Brenchley had me at ‘British girls’ school on Mars’”
Jennifer Stevenson

“I sincerely hope there will be further instalments”
Marissa Doyle

“This is a one-sitting page-turner!”
Sherwood Smith

“Twins we will never forget and cool Mars creatures.”
Miranda and Talia, age 9