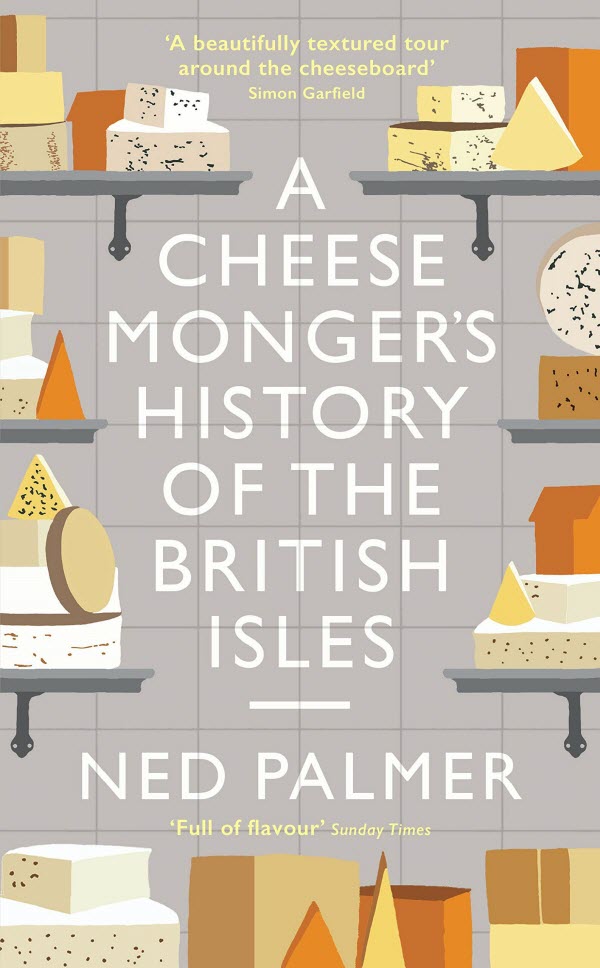 Yesterday evening I was at Toppings bookstore in Bath for an event that was both a book signing and a cheese tasting. The excuse for that was Ned Palmer’s A Cheesemonger’s History of The British Isles which is, as the title suggests, a history of Britain told through its cheeses. As you might guess, the combination of cheese and history was irresitable to me.

Palmer’s basic idea is to tell the history of British cheese as it was influenced by events in history. Cheese has a long and honourable place in the human story. The earliest evidence for cheese in the UK is at Durrington Walls, the Neolithic settlement used by the people building Stonehenge. The Romans brought their Italian cheeses to Britain because an ounce of cheese a day was part of the standard rations for a legionary. An entire legion needed a lot of cheese. From then on cheese-making in Britain was affected by a variety of historical events from the Black Death through to the Industrial Revolution and WWII.

Palmer has the gift of making history interesting for a general audience through the use of great little stories. As someone who gives a lot of history talks, I appreciate his skill in doing this. My favorite story of the night concerns the great 10th Century Welsh king, Hywel Dda (Hywel the Good), who is noted as a law giver. In ancient Welsh law divorce was legal and on the occasion of a divorce Hywel’s law code states that the wife should receive all of the cheese owned by the family. The assumption is that she was responsible for making it, and the text of the law gives some insight into the methods used.

Some of the stories are cutting edge archaeology too. When Palmer was talking about feeding the Roman Army I was reminded of this recent episode of Alice Roberts’ Digging for Britain where archaeologists from the University of Newcastle are excavating what they believe to be an Iron Age village that got rich from proving food to the Roman soldiers. That segment begins about 41 minutes in. There’s no specific mention of cheese, but they had cows and sheep so I’m pretty sure cheese was being made.

Of course there was cheese to eat too, and it helped that Palmer featured two of my favorite cheeses: Gorwydd Caerphilly and Stichelton. The cheeses were all provided by the Fine Cheese Company, which is where I buy cheese for special occasions. The Stichelton was Palmer’s choice for the 18th Century because Stilton was very much a thing back then. I had no idea that Daniel Defoe was responsible for starting the Stilton craze. Nor did I know that Stichelton is basically Olde English for Stilton. (They can’t call it Stilton because the official definition of Stilton requires it to be made from pasteurised milk.)

Palmer was unable to source the goat’s cheese he had written about in the book because the woman who made it has died. Artisan cheese-making can be like that. I still miss Llanboidy. I didn’t get the name of the substitute he had in, but it was very good. And I learned that you can always tell goat’s cheese because it is white, as compared to the ivory of sheep’s cheese and the darker colours of cow’s cheese.

You can’t do a cheese tasting in Somerset without a cheddar. Palmer chose Westcombe because it is made on the same farm that was once home to the legendary Edith Cannon who, by the age of 21, had already established a reputation as one of the best cheese-makers in Victorian England.

There’s an issue with cheddar in that the hard, crumbly, and very strong cheese that I grew up on is not the same thing that Cannon used to make. Westcombe is quite mild and softer. Much of this is a result of rationing in WWII. The Milk Marketing Board needed to ensure that cheese rations could be fairly distributed, and they encouraged the creation of hard cheeses to make this easier. Many great artisan cheeses were probably lost in the process.

Thankfully these days cheese-making is blooming in the UK. Palmer’s final example was Renegade Monk, a cheese that was recommended to me by Rosie at The Bristol Cheesemonger. It too is a Somerset cheese, but it is totally unlike cheddar. It is a lightly blue washed rind cheese that is soft and pungent with rambunctious taste. I got definite hints of aniseed towards the end. It is an aquired taste, but I’m delighted that such innovative cheese-making is happening in Somerset.

2 thoughts on “Cheese Tasting in Bath”