Eastercon is taking place at Heathrow this weekend, and one of the major announcements that has been made is that the 2024 bid for a UK Worldcon has selected a venue. The host city will once again be Glasgow, and the site will the familiar SECC, though it is now known as the Scottish Event Campus.

Mike Glyer has a brief report on File 770, and the official bid site can be found here. The bid is currently unopposed, but you never know what might turn up between now and 2022. Presupports will go on sale in Dublin.

As far as I know, there is no intention to revive the White Star Federated Spacelines and Starship Armadillo that Kevin and I created for the 2005 Worldcon. I don’t even know if the Armadillo is part of the facilities plans. But here’s a brief reminder of the Armadillo in flight: 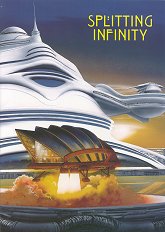 It is also worth noting that by 2024 Scotland may be an independent country within the EU. Or there could be English tanks in Glasgow. In the current state of UK politics, anything is possible. If Scotland is still part of the UK at that time it could be very difficult for non-white-Anglo people to attend.

Meanwhile Jukka Halme, who is at Eastercon, tweeted this:

Knowing Jukka, this could just be him tossing a large rock into the fannish lake and watching the ripples, but if it is serious I’m very interested.