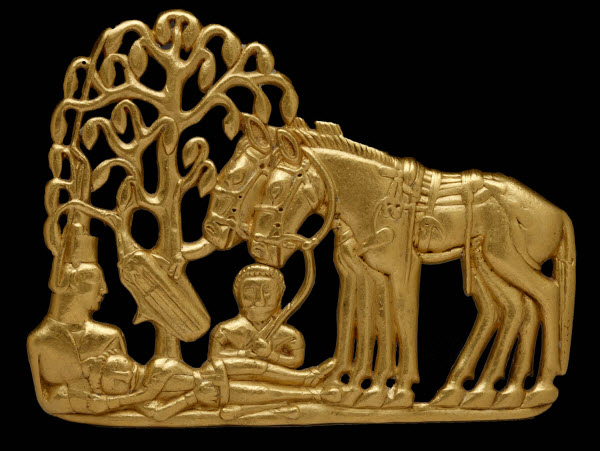 As I had to be in London all day Saturday I took the opportunity to travel a bit earlier than I needed on Friday and check out the new Scythians exhibition at the British Museum. This was a research trip, because many people believe that the Schythians were the original source of the Amazons legend. More of that later. First the exhibition.

The most obvious thing you see when you go in is that this exhibition was mounted with the assistance of the Russian government. Many of the items on display are from the Hermitage, and there is a lot of material about how early research into Scythian history was encouraged by Peter the Great. There’s even a big portrait of Peter to emphasize the fact. Of course Scythian territory is now almost entirely within the Russian Federation, which is a bit of a nuisance for those of us who can’t read academic papers in Russian, but I rather suspect that the Scythians are “Russian” in much the same way as the Celts are “English”.

The other obvious thing is that the Scythians were very fond of bling. There is loads of lovely gold jewelry on display. Personally I prefer some of the horse coverings. The Scythians clearly felt that their horses should look as good as they did.

I very much enjoyed getting to see all of this, but I was a little disappointed with the way that the write-ups tended to reinforce Western ideas of gender stereotypes. There are a couple of places where the text mentions that Scythian women rode horses, and could be fierce warriors. However, Scythian women are almost always shown wearing full-length dresses which are completely impractical for horse riding. Where a set of women’s leggings are displayed, they are described as “stockings”.

There is also an unspoken assumption throughout the text that warriors are men, despite the fact that large numbers of burials of Scythian women have been found with horses and weapons. One does have to be careful not to assume this means a “warrior grave”, but some of these women show clear signs of being wounded in face-to-face combat (as opposed to being cut down while running away, which is the usual way of dismissing wounds as evidence of women warriors).

I couldn’t see any mention of the Amazon legend in the exhibition, though a couple of books on the Amazons were on sale in the gift shop. The exhibition book excuses this by quoting Herodotus as saying that the Amazons regarded themselves as distinct from the Scythians. However, the term “Scythians” is about as precise as the term “Celts”. It refers to a group of peoples united by common language and culture. It seems entirely likely to me that all Herodotus meant by this was that the Amazons he met refused to acknowledge the local Scythian king as their overlord.

Anyway, I am glad I went, and I did pick up a few valuable bits of information from the exhibition. Now I need to get round to writing a presentation for next February.

2 thoughts on “Scythians at the British Museum”