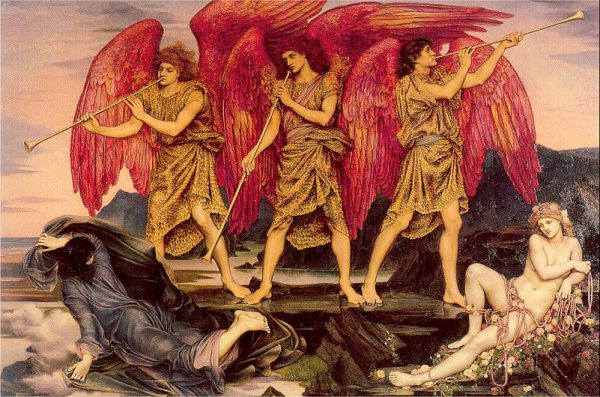 The Queer British Art exhibition at Tate Britain is a major undertaking and something I am very pleased to have seen. I’m by no means an art expert, so this is very much an amateur review, but hopefully you’ll find it useful.

One of my main reasons for wanting to go is that the exhibition features several pieces by Simeon Solomon. They are very fine, but the thing you see as you go in is another work by an unfairly ignored Pre-Raphaelite artist Evelyn De Morgan. The image above (which has rather poor color rendering – sorry) is “Aurora Triumphans” and represents Dawn escaping the bounds of sleep. Which is all very interesting except that the model for Aurora was a woman who was believed to have been De Morgan’s lover, and who she was fond of painting tied up.

The collection includes a number of well-known pieces including Charles Buchel’s portrait of Radclyffe Hall and William Strang’s portrait of Vita Sackville-West. There are also several Aubrey Beardsley pieces, for those of you who like priapic art. (Personally I love Beardsley’s style, but the prevalence of giant penises is a bit much after a while.) 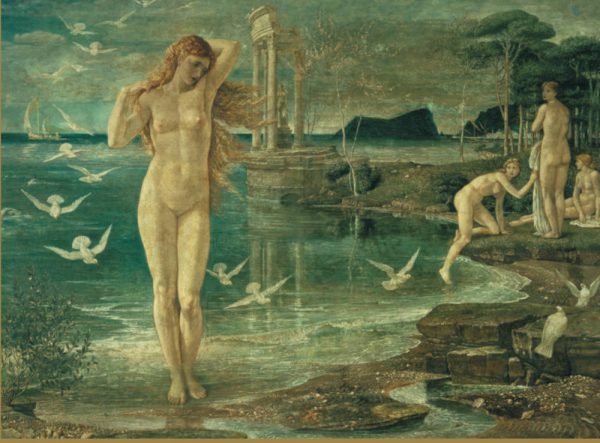 Another of my favorite pieces (though not so much for the quality of the art) is this one by Walter Crane. It is titled “The Renaissance of Venus” and it looks like a fairly standard mythological picture. It only becomes obviously queer when you know that the model for Venus was a young man called Alessandro de Marco. Crane’s excuse was that his wife would not allow him to use nude women as models, so he had to use men instead. Yeah, right.

Which brings me to the whole vexed question of trans inclusion. In my post on the Claude Cahun exhibition Andrew Butler mentions a feedback card that accuses the exhibition of not having any trans representation. Frankly I think that’s ridiculous.

To start with there is much trans imagery on show. There’s the issue of Picture Post with Roberta Cowell’s coming out story in it. There is a famous photo of Fanny and Stella (which is much sharper in real life than any of the digital versions I have seen). And there are some fascinating photos by John Deakin. One of them is from a series called “drag” which was once thought to be of drag queens but has since been discovered to be of women dressed as drag queens. Another is of a person known only as “Colin”. The originals are in the Getty Archive (e.g. this one) where they are labeled as being of a drag artist, but the Tate notes that we don’t know who Colin was, or how they identified.

There is also a very strange Hockney piece titled “Bertha alias Bernie” which could be seen as representing a trans identity emerging from the original body of the subject.

The curators have made a point of getting trans input on the show. There are cards giving input from people such as Juno Roche and Sabah Choudrey.

It is true that there are no binary trans artists exhibited. The show covers the period 1861-1967, a period in which male homosexuality was illegal in the UK. This was not a time when anyone who was openly and obviously trans was likely to become a famous artist, so I’m not entirely surprised at the absence. But there are at least two artists who identified openly as non-binary. One is Cahun, who is included because they lived in Jersey. The other is Gluck who is the face of the exhibition. Just look at this and try to tell me that this is not a trans person of some sort. 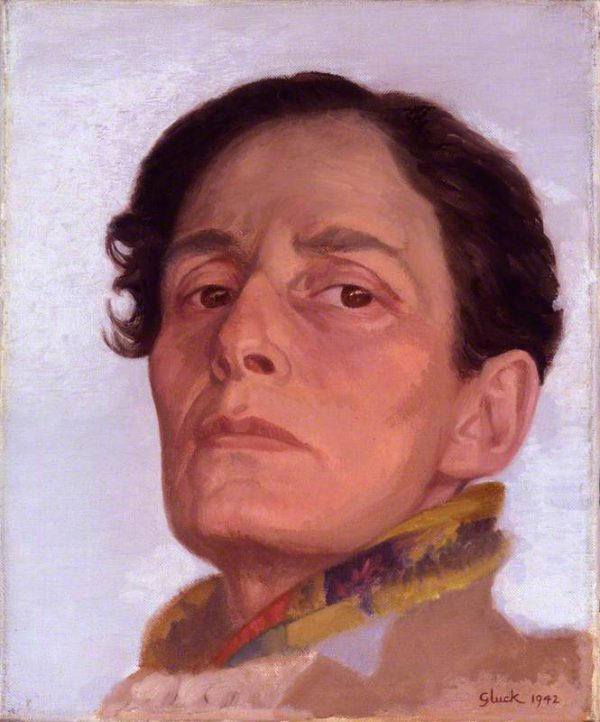 Gluck was assigned female at birth but eschewed that identity. They famously insisted on being known only as Gluck, with no prefixes or suffixes. Anyone who dared refer to them as “Miss Gluck” would be on the receiving end of a mighty strop. Being non-binary is not a new invention. There were people who were proudly non-binary at the beginning of the 20th Century.

There are two pieces by Gluck in the show. The other is “Lilac and Guelder Rose”, a painting of a flower arrangement. This was one of the paintings done for Gluck’s sometime girlfriend, Constance Spry, who was then the official flower arranger for the royal family. I’ve seen lots of pictures of it online, but none of them can capture the remarkable texture of the real thing. Gluck built up layers of paint to make each leaf and petal stand out physically from the canvass.

The painting is displayed in Gluck’s trademark frame style, which is supposed to be painted the same color as the background wall. It’s a shame that the Tate was unable to do that.

Where I will fault the exhibition is on deadnaming. Gluck and Cahun both have their birth names paraded as their “real” identities. I don’t think either of them would be happy about this.

All in all, I’m pretty happy with the exhibition. I’m certainly glad I went. My thanks to Clare Barlow and her team for putting it on.

While I was there I had a look around the rest of Tate Britain. As an art gallery it is a bit limited by being devoted to British art. There’s quite a bit of Pre-Raphaelite material in there, but frankly most of them weren’t very good. Solomon was perhaps the best of them, and they treated him abominably when he was arrested for sodomy. De Morgan was also good, but she was a woman and has been passed over because of that. The best Tate Britain can do is John William Waterhouse’s “The Lady of Shalott”. Personally I much prefer Frank Dicksee’s “La Belle Dame San Merci” which is in Bristol Museum.

What Tate Britain does have is a huge Turner collection. If you have any affinity for the sea you should go take a look. Currently they also have a small William Blake exhibition which I also very much enjoyed. Alongside the Queer Art exhibition they have one devoted solely to David Hockney. I didn’t see that because you needed to book in advance to get in, but I presume it will be rather good. It is a shame, however, that so little of Hockney’s obviously homoerotic art found its way into the Queer Art show.

3 thoughts on “Queer Art at the Tate”