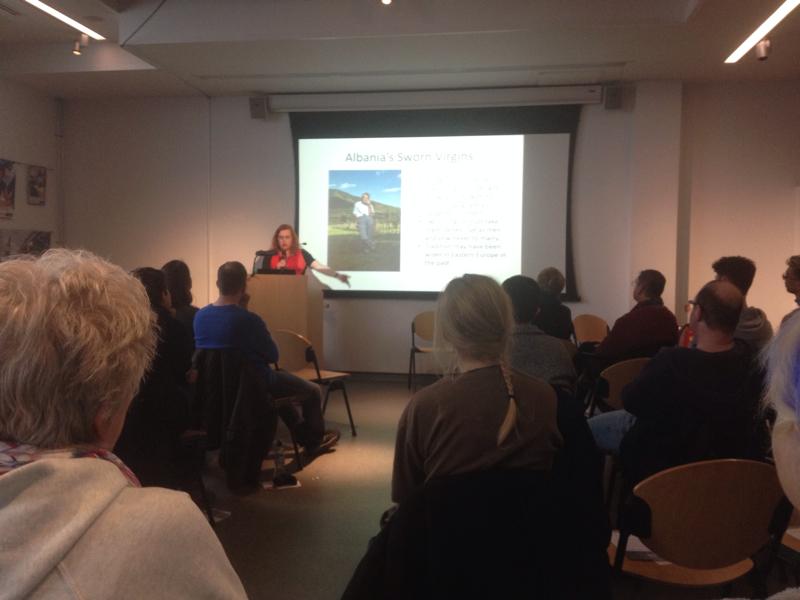 I spent yesterday afternoon in Bristol giving a talk on the history of trans people at the M-Shed on behalf of Out Stories Bristol. As you can see from the photo (for which thanks to Mary Milton), I actually had an audience. In fact I’m told that we sold out on Eventbrite, which was quite encouraging. Also the feedback was very pleasing.

The talk begins with the following quote which comes from the notorious appearance of the leading TERF academic, Sheila Jeffreys, on BBC Radio 4’s Woman’s Hour program last year.

The point of the talk was to prove Jeffreys not just wrong, but spectacularly and hilariously wrong. In pursuit of this objective I took a lightning tour through 2000 years of history and all five continents, producing evidence of the existence of, and social acceptance of, trans people in many different cultures and at many different times in history. The only thing different about the 20th century was a step change in the medical technology available, and a start on reversing the drastic curtailment of trans rights that took place in Western Europe in the past few hundred years. Hopefully my audience went away understanding that the negative view we have of trans people in the UK, and throughout Western “civilization”, is the exception rather than the rule.

I had a lot of fun researching the talk. I wasn’t able to find evidence of trans people in every country in the world, but I did manage quite a lot. I was relieved to finally track down something in the Inca empire, because Latin America was looking a bit thin. It turned out that English translations of a key Spanish source on Inca religion had omitted the sentence that makes it plain that members of a particular priesthood were trans people. I was also very pleased to find evidence of trans people amongst the indigenous people of Australia. Given how long they were isolated from the rest of mankind, and the slow pace of change in such cultures, it seems reasonable to assume that trans people have been with us for over 50,000 years.

I did draw a blank in a few places. There is evidence of trans people in many African countries, but Europeans seem to have done a particularly efficient job of destroying their local cultures. Things like the rinderpest epidemic of the 1890s resulted in a mindboggling death toll. (And by the way, America, measles is a direct evolutionary descendent of rinderpest.) I had no luck with the Aztecs either, but they did have a god of gay men so I forgave them.

The biggest problem was Antarctica, because there are no native people. However, I did manage to find evidence of the world’s first known trans male penguin, which is a pretty awesome thing.

I’ll be giving a repeat of the talk at Bath University on the 26th, and hopefully I’ll get to do it in some other places in the future. I think I have a recording, but I’m a bit hesitant about making it public because I had to skim so quickly over so many different cultures. I’d prefer to do some more in-depth posts on particular aspects of the talk.

4 thoughts on “I Do Trans History, With Penguins”