Video editing takes a while, but so that you don’t have to wait too long I have uploaded some still photos. They are mainly taken in and around the convention center and main hotel (which is a Holiday Inn). There are no pictures of the larger programming rooms and exhibit halls because such things are quite dull, and also the exhibit halls were being renovated when I visited, but you’ll see more of them when I upload the video.

If you want to see a map of the facilities, there’s one on the Helsinki in 2015 website. Note that Halls 4 and 5, which are the ones currently reserved for us, are not off to the side, they are above halls 1-3. The convention center is fully accessible, with ramps and elevators where needed.

After the views of the convention center I’ve included some views of Pasila railway station. Pasila is the suburb of Helsinki where the convention center is situated. A key picture is the one of the local area map, which shows you just how close the station is to the proposed facilities. I walked it the long way, going through the station concourse rather than using the other entrance at the far end of the platforms, and it took me 10 minutes.

Why is this important? Well for starters the railway station is a good source for cheap food. There are plenty of places to eat in the convention center, but if you are short of cash you don’t have far to go to find something more economic. Secondly the convention center hotel only has 239 rooms. That should be sufficient to accommodate everyone who needs to be on site, but some foreign visitors will need to use the many hotels located around the central Helsinki railway station. That’s just under 4km away, and trains are very frequent during the day. The city has promised to supply free transit passes to Worldcon attendees, so travel won’t cost you anything. And staying in the city means you’ll have access to all of the tourist stuff, and top restaurants, if you want it.

But wait, what about evening events and a parties? Won’t that be a problem? No. If you consult the timetable and search for trains from Pasila to Helsinki you’ll see that they run through the night. There is a period between 3:00am and 4:00am when nothing much runs, but otherwise there is service. Also Helsinki is really safe.

Finally I have a few photos from central Helsinki. Some of them are from the National Library of Finland, which is a beautiful building. Others are from around the Helsinki railway station. 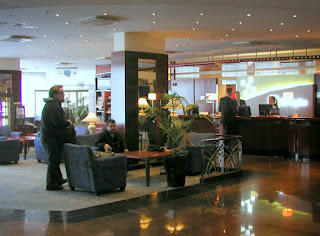 2 thoughts on “Helsinki – Some Photos”