I have been following the debate over the World Fantasy Award trophy with some interest. For those of you who have managed to miss it, the story started with this blog post from Nnedi Okorafor, and discussion has ranged far and wide, including on the latest episode of the Coode Street Podcast.

I don’t particularly want to comment on the issue of Lovecraft and racism. I think Nnedi has dealt with the issue very well and I don’t have much to add beyond noting that the Lovecraft bust used as a World Fantasy trophy is spectacularly ugly, and I too am pretty sure that Gahan Wilson did that deliberately with Lovercaft’s nature in mind. I like the fact that it is ugly, and that it is rather reminiscent of an Easter Island head. 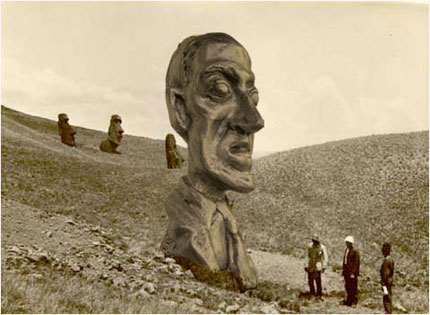 I have, however, been pondering how social attitudes change, and what I’d think if I ever won a trophy that was named after someone who was rampantly transphobic. The thing is that if you go back far enough then pretty much everyone was transphobic. Did Hugo Gernsback despise trans people? Probably, if someone had told him about such things. Would Verne or Wells be disgusted by me? Quite likely. Joanna Russ at least had the good grace to apologize later in life. I’m still waiting for an apology from Mary Gentle, but that doesn’t stop me loving most of her books.

One the one hand, hardly any of the authors whose work I admire had said anything bad about trans people, because there are so few of us that we didn’t come to the notice of most people until recently. On the other hand social attitudes have been such that, prior to the turn of the century, trans people were almost universally despised, so the chances are that anyone who was alive at the time was prejudiced against us.

Then again, if you go back far enough (and it doesn’t have to be that much further) then most white people had some fairly racist attitudes. The difference with Lovecraft was that he was spectacularly racist (and misogynist, and anti-Semitic, and so on), and made his feelings known in his writing. I’m not sure how I’d feel if I won an award whose trophy was a bust of Julie Bindel.

So I guess I’m still a bit confused about it. I can quite see where Nnedi is coming from. Equally I think that women, Jews and now People of Color winning the World Fantasy Award would have exploded Lovecraft’s brain. Hopefully it is also exploding the brains of people who still think like him. Goodness only knows what he would have made of me, but I’d like to continue to have the opportunity to do more brain exploding. If World Fantasy does decide to change the trophy, I shall still treasure my Howie pin and occasionally talk to it to remind HPL just how wrong he was.