This morning I decided to head out to explore the nearby town of Bradford on Avon. It looked very pretty from the train, and it proved to be just as nice on foot.

I managed to get lucky on the way. As I was heading off for the station Marjorie drove past. She was also headed for Bradford and was able to both give me a lift and show me round the best places. Mostly Bath is better shopping, as you would expect, but there are some nice little shops in Bradford, including an excellent picture framer where we engaged the young man who served us in a lengthy conversation about Neil Gaiman and comics.

The best thing to do in Bradford, however, is drink. Not alcohol (though I did spot a shop offering local cider), but tea. Because Bradford is home to The Bridge Tea Rooms. This is a place that would make Gail Carriger die of happiness. It is in a lovely old building, is done out as a proper Victorian tea room, serves rather splendid food and ever better tea. The waitresses are all in maid costumes. Marjorie and I would love to turn up there with a bunch of people in steampunk costumes. And in 2009 it was voted the best tea place in the country, so you don’t have to take our word for its quality. It is, of course, totally Theme Park Britain, but as the food and tea is good I’m not complaining.

We didn’t actually have Afternoon Tea, because we both needed to be back home in the afternoon, but I am certainly planning on going back soon. I had their Empress of China tea, in honor of Guy Gavriel Kay’s Under Heaven (which I am currently reading). The tea was so nice I bought a packet to take home.

There are a few photos below. 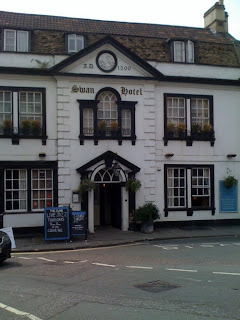