I wasn’t planning on blogging about the Go Bananas! fundraiser, but it turns out that individual updates on the JustGiving site are limited to 550 characters, which will be a pain when I want to get into detail about recipes, so here I am.

As a reminder, I am raising money for One25, by using bananas in all my meals until Sunday, and I would be very grateful if you could chip in a few quid.

So, day 1, and the fundraiser officially started at Noon. What have I been eating?

One of the limitations that I have in this project is that I don’t have a functional oven. I do, however, have a ridiculous collection of kitchen gadgets, including a Tefal Cake Factory. It has a recipe for Chocolate Chip Banana Bread, so I gave it a try.

There’s not a lot of point giving you a detailed recipe as it will only work with the machine in question. And if you have one, you’ll already have the recipe. I will note that it is made with buckwheat flour, presumably for the slightly nutty taste.

But wait, Cheryl, why are you making bread in a cake machine? Well, because what we call banana bread isn’t really bread. At least not in the recipes I have been looking at. One of the ways in which people distinguish bread and cake is that bread is leavened with yeast, whereas cake uses baking powder. Having said that, my bread machine has a “cake” programme, so I’ll be trying a different banana bread recipe later in the week.

The Cake Factory makes cute little finger cakes as per the photo. And they have chocolate in them, which is a fine start to the week.

Bananas are a regular feature of smoothies, and now that the weather is improving I’ll be making a lot of them. Yes, of course I have a smoothie maker. Did you have to ask? It is a Nutri Ninja, for those who are interested in such things.

Normally I just throw stuff in and see how the mixture works, and that’s how I’m going to start. Banana, some frozen raspberries, plain yoghurt, and some milk, and perhaps a little honey as the raspberries can be quite tart. Blitz and drink. Yum. 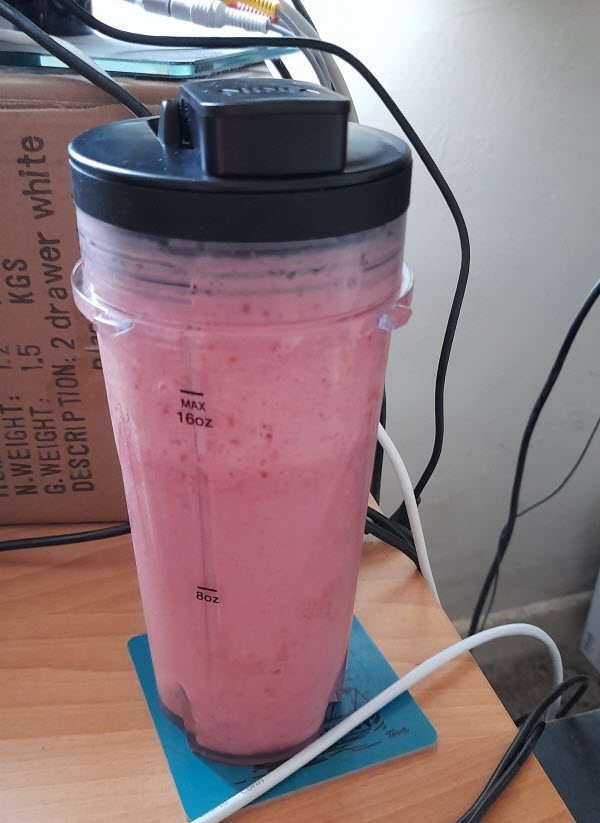 When I went looking for main course recipes I expected to find curries. I did not expect to find risottos. But Banana Risotto is apparently a thing. The recipe is standard risotto stuff. Fry some onion (or in this case shallots are better) until golden. Add some arborio rice and fry for a few more minutes. Then slowly add liquid while simmering until the rice is soft, which takes about half an hour. The liquid in this case is white wine and vegetable stock.

The recipe I used suggested adding one mashed banana half way through, and one near the end. Also added at the end was grated parmesan, which surprised me a little. Some recipes also suggested peas or mange tout, which I went for because it added much needed colour.

The banana makes the risotto quite sweet, but I was very pleased with how well it worked, especially as I’d been a bit nervous about the parmesan. 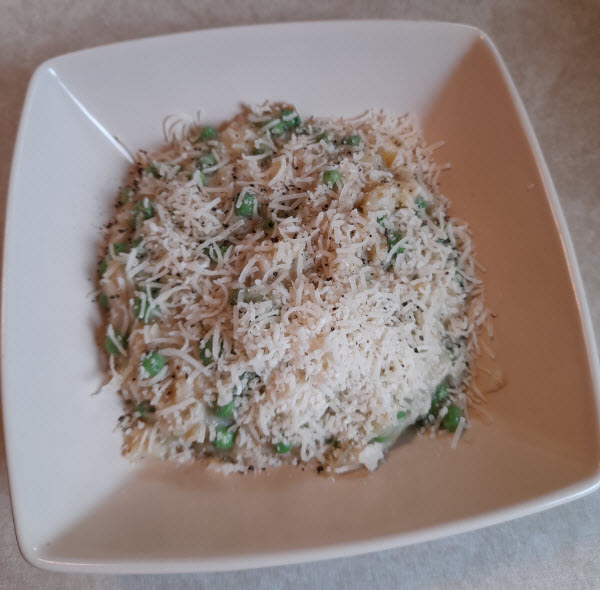 I can remember from when I was much younger, that you could get weird banana-shaped and flavoured sweets. We’ll be going a bit mad with banana desserts later in the week, but for now I’m keeping it simple. Marks & Spencer provided a decent facsimile of my childhood memory. I have no idea why they are called “foam”. Farah suggested on Twitter that is is because they have the consistency of foam cushions, which I find distinctly unappetising. Thankfully the sweets did not taste of that sort of foam. 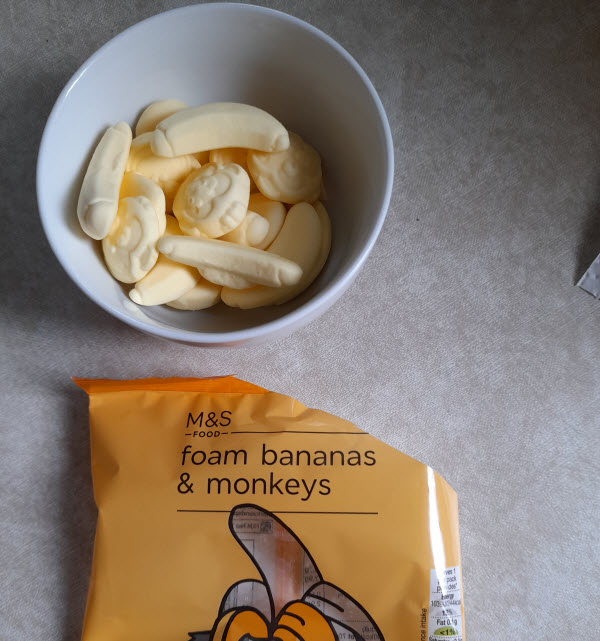