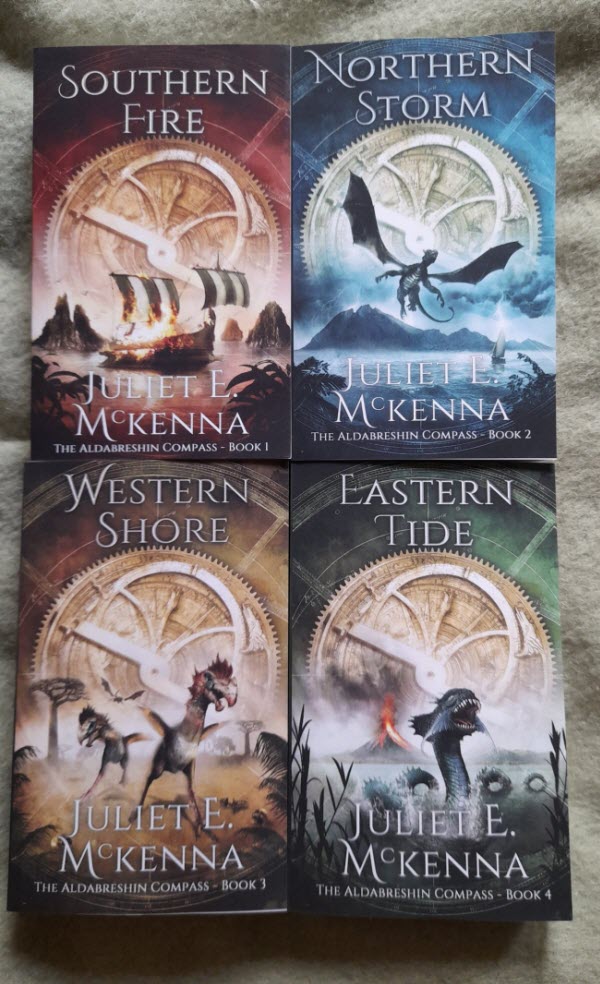 This took rather longer than expected due to the pandemic and the need to get the map re-done, but finally we have Juliet McKenna’s Aldabreshin Compass series back in print. The image above is of the paperbacks, and showcases Ben Baldwin’s brilliant new covers. I don’t have all of the hardcovers yet, but UPS has promised they’ll be delivered tomorrow and that should be before I have to leave for BristolCon.

I’m particularly pleased to have this series back in print because it shows that fantasy writers have been aware of diversty issues for some time. The majority of the people we meet in these books are black, and the US edition of Southern Fire had a good picture of Daish Kheda on the cover. It was published in 2003. The culture of the Aldabreshin Archipelago is also fascinating. Men have multiple wives, but their role in society is limited to law and war. Economic power is firmly vested in the women who do all of the trading. Eunuchs are commonplace. And magic is viewed with deep suspicion, if not horror.

Thanks to the worldwide paper shortage, and my being off to Canada next week, I won’t be able to fulfill orders from the Wizard’s Tower store swiftly, but the books should all be orderable from bookstores as of today. I will be looking for links and updating the Wizard’s Tower main site accordingly.