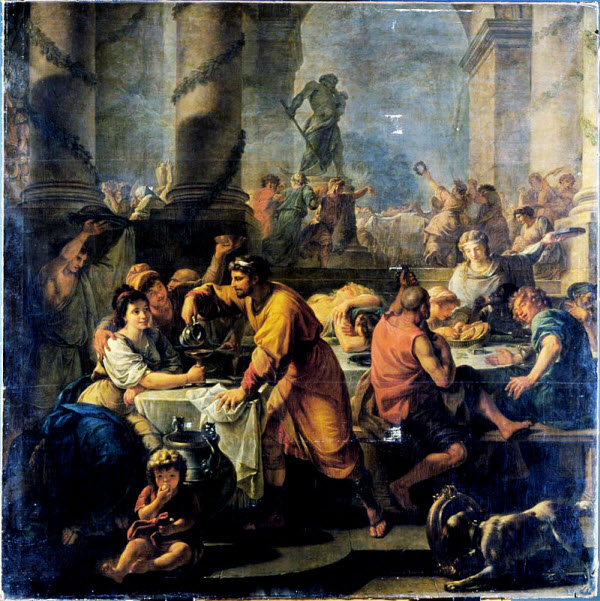 Today, December 17th, is the first day of the Roman midwinter festival of Saturnalia. It started out as a one-day thing, and through the long history of Rome morphed into a multi-day epic holiday incorporating the solstice and terminating in the birthday of the sun god, Sol Invictus, on the 25th. Among other things, it has given us the concept of the Lord of Misrule.

As I have been doing a lot of Roman stuff recently, I figured that I should celebrate properly, which means Roman food. For lunch I had bread, olives, feta cheese and octopus. It was yummy. But what to cook for the evening meal?

The Romans didn’t have turkey. They didn’t have tomatoes or potatoes either. But they did have a vast empire, and if you were rich enough you could bring in food from the far flung corners of the empire. So what might Romans have in place of turkey? Ostrich seemed like a good idea.

Obviously I don’t need a whole ostrich, and I don’t have the means of cooking one, but Tesco does sell ostrich steaks. All I need is something to do with them. Does Apicius have a recipe for ostrich? Of course, he has two. I’ll be experimenting with the first of them. I’ll be serving it with one of Apicius’s mushroom dishes, and some green vegetables.

There will be wine, of course. Mustn’t forget to show respect to dear Dionysus.