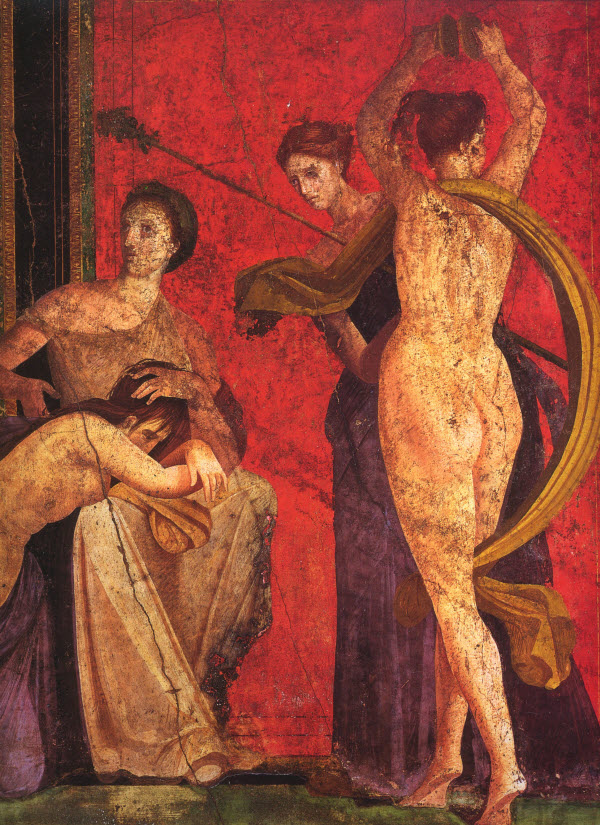 In honour of Lesbian Visibility Week I thought I would do a post about lesbianism in Ancient Rome. There are, of course, numerous examples of men having sex with men in Roman literature. There are a lot fewer examples of women having sex with women. That’s in no small part because almost all of the surviving Roman literature was written by men. But the women are there, of you know where to look.

The first thing to note is that sexuality wasn’t a matter of identity for Romans the way it is for us. Sex was something that you did, not something that you were. For Roman men it was far more important to know whether you were penetrating or being penetrated than who you were doing it with. In recognition of that there were at least three different words for effeminate men, though these could often refer to social behavior rather than sexual habits.

For women there was one word, “tribade”. It meant someone who rubs. It isn’t clear whether the Romans actually understood this as having sex, because no penises were involved, but it was certainly something the women might do.

Mention of Greece reminds us that the Romans would have been familiar with the legends of the Amazons. In an all-female society, women having sex with women would be expected. They would have believed that the Amazons were real as well. After all, they had contact with women warriors of the Scythians who lived north of the Black Sea, with the dark-sinned warrior queens of the city of Meroë south of Egypt, and with the warrior queens of Britannia.

The Romans were also very familiar with the poetry of Sappho of Lesbos. Far more of her work would have been available to them than survives today. In Hadrian’s time, Greek culture was hugely fashionable and it became a thing for upper class women to write poetry “in the style of Sappho”. Sadly this meant writing in Greek and using the same grammatical forms as Sappho. It would be like us writing sonnets using Shakespearean English. It did not mean content.

On the other hand, we know about this at least in part because of some women’s writing that has survived. Julia Balbilla and Claudia Damo were two wealthy Roman women who were part of the entourage of Hadrian’s wife, Vibia Sabina. Their poems have survived because they wrote them (or more likely had them written by slaves) on a rather large statue of Amenhotep III during an Imperial tour of Egypt. Hadrian and his wife had married for political reasons when they were very young and by this time hated each other. Hadrian apparently had no interest in sex with women. It is rumoured that Vibia Sabina had an affair with the historian, Suetonius, but it wouldn’t be surprising, given how much Sappho they were reading, if at least some of the ladies of her court became close to each other.

One place were women might have gathered to have sex with each other is in meetings of mystery cults. These were a strange phenomenon of Roman religious life that we might call secret societies, but which had as their excuse the worship of particular gods. Some mystery cults were more like the Freemasons, which a man might join in the hope of befriending the rich and powerful. Others seems to have been excuses for orgies. Roman men were deeply suspicious of mystery cults that catered to women, on the not unreasonable basis that their wives might be sneaking off to have sex with other people at their meetings. The fresco at the top of this post is from Pompeii and is believed to depict a meeting of a mystery cult.

Some of our most obvious references to lesbian Romans come in works of fiction. The poet Martial wrote about a woman called Philaenis whom, he says, has sex with both boys and girls, allegedly averaging 11 girls a day. Philaenis is also the supposed name of the author of a legendary Greek sex manual, so if this is a real person that Martial is talking about he has probably used a pseudonym, and may even have made her up. However, even if he is exaggerating for effect, it is certainly something that he thinks a woman might do.

However, by far the best example of love between women in Roman literature comes in The Dialogues of the Courtesans (sometimes called The Mimes of the Courtesans) by Lucian of Samosata. This is a satirical comedy in which high class sex workers tell of entertaining encounters they have had with clients. In one of these Leaina tells of a wealthy person known as Megilla who is a client of hers. Although this person is understood to have been assigned female at birth, he dresses like a man and insists on being called Megillos, which is a Greek equivalent of insisting on male pronouns. He even has a wife, a woman called Demonassa.

We need to bear in mind here that Lucian is a satirist. He’s not averse to making things up. He did, after all, write a book about people traveling to the Moon. So while Megillos might sound to us like a trans man, there’s no guarantee that he is based on a real person that Lucian knew. This might be another case of exaggerating for effect.

However, the important point here is not whether Megillos is real, but where Lucian has him hail from. Demonassa, his wife, is from Corinth, but Megillos is from the island of Lesbos. I don’t believe that this is an accident. Sappho lived on Lesbos, and Diodorus Siculus tells us that the island was once an Amazon colony. Lucian chose Lesbos, I’m sure, because although the English word “lesbian” only acquired its current meaning in 1890, as far back as the first Century CE the island of Lesbos already had a reputation of being home to women who loved women.