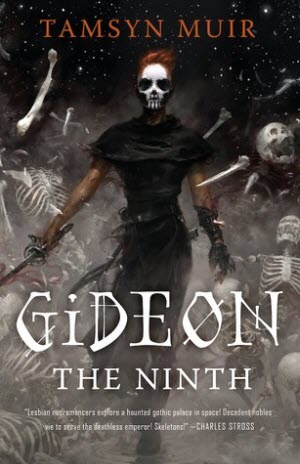 I’m sure that no one is unduly surprised that Tamsyn Muir’s Gideon the Ninth won this year’s Crawford Award. Well, apart from the silly people who insist that because it is set in the future and has spaceships it can’t be fantasy, even though it is a story about sword fighting and necromancy.

As you may know, I am part of the group of people that the IAFA Awards Committee consults with regarding the Crawford. We are not exactly a jury, and the makeup of the group varies from year to year depending on who is available. It is a huge honour to take part, and my thanks are due especially to Gary K Wolfe who administers the whole thing.

It was a special joy to have Mimi Mondal as part of the group this year. She has a very different perspective to offer, and got us reading books we would not otherwise have heard of.

There are more details about the award at Locus. Commiserations are due to Alix E Harrow whose The Ten Thousand Doors of January put up a very valiant fight. We don’t often specifically name a runner up.

Anyway, congratulations Tamsyn. I’m very much looking forward to the sequel, and to seeing Gideon on the Hugo ballot in Wellington.