I spent much of today in Cardiff helping kick off a project to create queer history tours of the National Museum of Wales. This is being run by the fabulous Dan Vo who also created the similar tours at the V&A in London. The museum is mainly natural history and art, but there’s plenty there to talk about. I will have more to say about the queer stuff in due course, but today I want to highlight one of the more bizarre things I found in the museum. 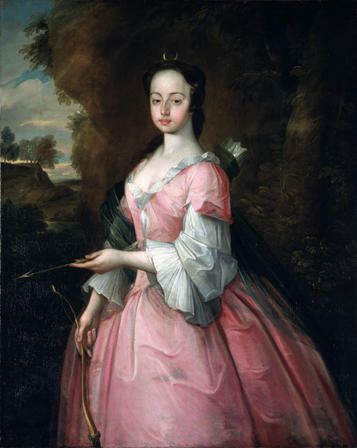 Whenever I visit a museum I am always on the lookout for Amazons, so my interest was caught by this painting of a woman dressed as Diana herself. She has a bow and quiver, and even a little crescent moon headdress. Who was this woman, I wondered?

Well, her name is Diana Pryce (not Diana Prince), and her father was Sir John Pryce, the 5th Baronet of the Pryce family of Newtown Hall in Montgomeryshire. Sir John was what the museum descibes as a “well known eccentric”. This refers to the fact that he kept the embalmed bodies of his first two wives in his bedroom, until he got married for a third time and his new wife insisted that he got rid of them.

Wife three also pre-deceased him, whereupon Sir John hired a local faith healer, Bridget Bostock, to bring her back from the dead. Sadly the woman’s skills were not up to the task.

People had some very strange ideas in the 18th Century.

One thought on “Wild, Wild Wales”