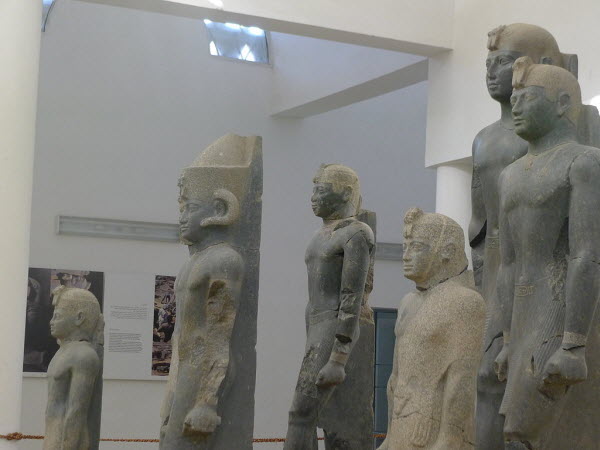 As part of their celebration of Black History Month, Channel 4 has run an archaeology programme about Kush. As is the way of such things, it is fairly superficial, and spends more time dramatising the activities of modern (white) archaeologists than it does talking about the Kushites. Nevertheless, it does have some lovely shots of the inside of the Temple of Amun at Jebel Barkal and some great panoramic shots of other Kushite settlements. I was particularly impressed by the statues of the 25th Dynasty pharaohs fround at Kerma, which you can see in the photo above.

The programme does mention the great Kushite pharaoh, Taharqa, noting that he ruled over a kingdom stretching all the way from Khartoum to the Mediterranean. It did not mention him fighting alongside King Hezekiah of Judah against Sennacherib of Assyria. Nor does it mention that he survived both Sennacherib and Esarhaddon, but was eventually defeated by Ashurbanipal. Assyria v Kush (with added Israelites) for the control of Egypt has to be one of the greatest stories of the ancient world, and I’m rather sad that nothing seems to have come of Will Smith’s planned movie.

The programme also didn’t mention that there is a shrine to Amun built by Taharqa in the Ashmolean Museum in Oxford. It is the biggest single item in their collection, and it was made by Kushites, for a Kushite pharaoh.

There is brief mention of Meroë being the successor kingdom to Kush, but there is nothing about that kindgom preserving Egyptian culture long into the Roman period. Nor does it mention Queen Amanirenas beating up the Romans.

In short, it could have been so much better, because there are such great stories to tell. I need to dig out the audio from the radio show that Olivette Otele and I did last year and get it back online.