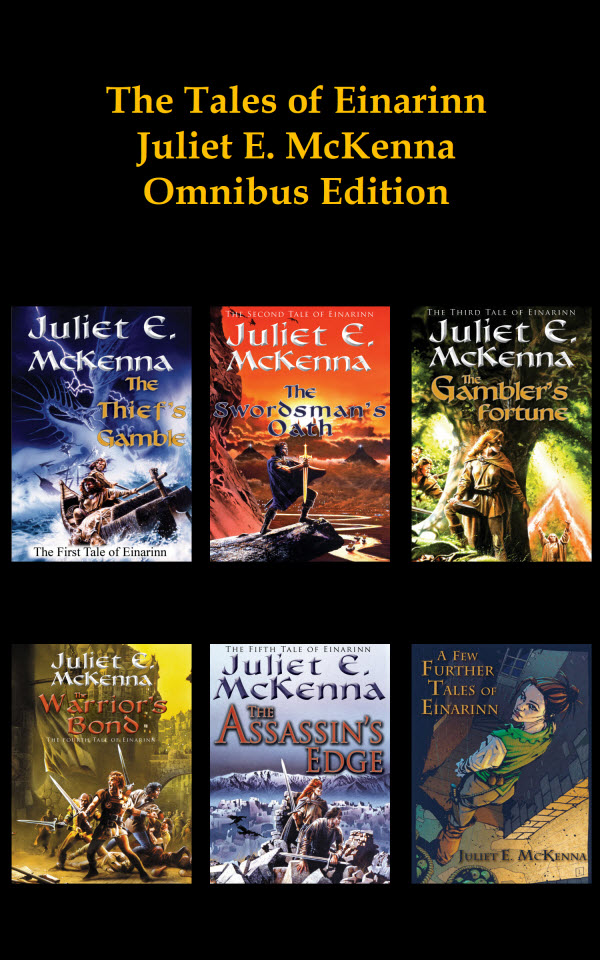 Doesn’t time fly! It was 20 years ago this month that Juliet McKenna burst onto the fantasy scene with The Thief’s Gamble. Given the auspicious anniversary, Juliet and I thought that it would be a good idea to have presents, for you folks.

From now until the end of January, the five volumes of the original Tales of Einarinn are on sale. The prices are US$2.99, £2.35 and €2.99. Apologies to European readers, but Amazon won’t let us sell for less than that at their standard royalty rate. I see that Google are already discounting the price of some of the books, so you might try them.

But that’s not all. You can also buy a fabulous onmibus edition that contains all five novels and the short story collection, A Few Further Tales of Einarinn. And until the end of January it is priced at just $9.99/£7.99. That’s live in Barnes & Noble and Kobo now. Google will doubtless catch up at some point. It is not on Amazon, because their website kept crashing when I tried to upload the file (insert rant about the bloated nature of the Kindle file format here). But if you need a Kindle version you can buy it from the Wizard’s Tower Bookstore.

Yes, the bookstore has re-opened after a couple of years stuck in limbo due to VAT issues. Thankfully that’s all sorted now, although it we do end up with a No Deal Brexit, which is looking increasingly likely, it will have to close again.

Of course I’d like you to buy everything from the Wizard’s Tower bookstore, because Juliet gets more money that way, but I appreciate that you may need to pay in your local currency.

That’s today’s Wizard’s Tower news. There will be more later in the month.