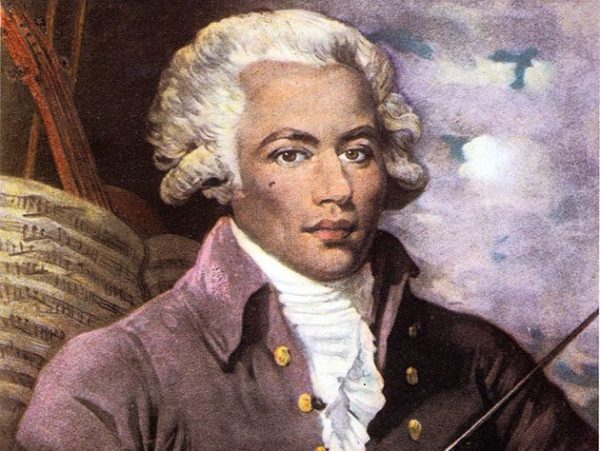 I was in the studio today for a very special edition of Women’s Outlook. The entire show was co-presented by, and produced by, my good friend Olivette Otele.

If you have been following my tweetage you will know that Olivette has recently been appointed Professor of History at Bath Spa University. For non-UK readers, that’s a big deal, because here only the most senior academics can call themselves Professor. Olivette is the first black woman to become a professor of history in the UK.

Most of her work to date has centered on colonialism and slavery, but for today we chose to look further back in time to showcase some of the people of colour from Africa who interacted with Europe in the past.

The chap in the picture at the top is Joseph Boulogne, the Chevalier Saint Georges. He was a military man, an accomplished fencer, and also a brilliant musician. He was so good at music that he became Marie Antoinette’s music teacher, and we played one of his compositions during the show. I was delighted to discover that he once fought an exhibition duel in London against the famous French trans woman, the Chevalier d’Eon. Olivette also informed me that during the French Revolution he fought alongside the father of Alexander Dumas (hands up everyone who didn’t know that the creator of the Three Musketeers was black).

Also featured on the show were Saint Maurice, Jacobus Capitein, and my personal favourite, Queen Amanirenas, the one-eyed warrior who gave Augustus a bloody nose. Plus a whole lot more interesting people.

The Listen Again feature appears to be working OK again at the moment. You can listen to the first hour here, and the second hour here.

Olivette also selected all of the music for the show. I have to say that she has great taste. Here is the playlist:

I hope you enjoy the show. I’ll be back with a more regular slot on November 7th.