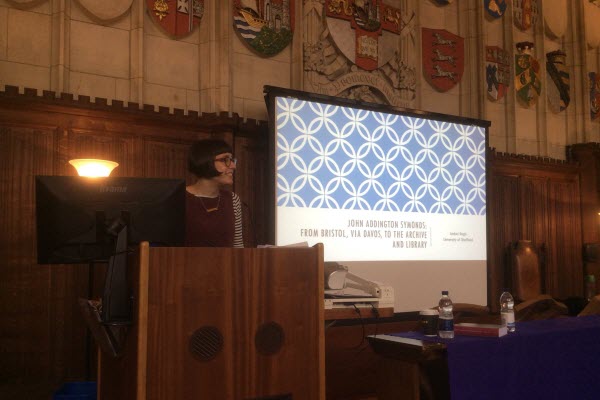 Saturday saw the AGM of OutStories Bristol and the associated John Addington Symonds Birthday Lecture. The event is sponsored for us by the Institute for Greece, Rome and the Classical Tradition at Bristol University, which means we get the use of the lovely Wills Memorial Building for the event.

This year the lecture had special significance for us because it was actually about John Addington Symonds himself. Symonds was born in Berkeley Square, just the other side of Park Street from the Wills Memorial Building. He lived for a while in Clifton Hill House, which is now one of Bristol University’s conference venues. And of course some of his archives are held in Bristol.

It was archives that we were mainly concerned with on Saturday, in particular those pertaining to Symonds memoirs. They deal initially with Symonds’ coming to terms with his homosexual identity — something which there were no polite words for when he was young, so deeply had European culture supressed the idea. It was only later studying Classical Greece, and collaborating with the sexologist, Havelock Ellis, that he was able to write about how he felt.

That realisation, of course, brought with it the knowledge that his memoirs would be far too gay to publish. Or, to use the euphenmism of the day, “too Greek”. That’s the term his collegues at Oxford used when advising him not to apply for a senior post.

And so the memoirs were locked away, in a green cardbard box tied up with string. By the terms of Symonds’ will, they were bequeathed to his friend, Horatio Brown, with strict instructions not to allow anything embarrassing to be published, but neither to allow them to be destroyed. Through an Herculean effort of editing, Brown managed to produce a biography that was relatively complete, slightly suggestive, but free of any taint of scandal.

The rest of the story follows the heroic attempts of Symonds’ youngest daughter, Dame Katharine Furse, to gain access to the memoirs and have a more honest version published. It appears that Symonds’ proclivities were an open secret in the household, and younger generations were much less ashamed of same-sex liasions than their forebears.

All of this was related to us by Amber Regis, a scholar who has produced the most complete version yet of the memoirs. Amber was able to regale us with stories of adventures in the archives, and bring to life the voices of Symonds, Furse and other characters in the story.

I say “most complete yet” because there are still items under lock and key. Horatio Brown died without immediate offspring, and the rights to his literary estate passed to a pair of nephews in Australia. Those men, and their descendents, currently hold the rights to certain documents that Amber is not allowed to publish. So, Australian friends, if your last name is Brown, or you are descended from Browns, do check your family tree. There may be a lovely surprise in it for you.

By the way, the sharp-eyed among you will have noticed that Amber is based at the University of Sheffield. We did have a long chat after the meeting about the existence of aliens in they city. It has all been very exciting for the locals.

It was a very splendid day. My thanks to Amber, to the IGRCT, and to Chris Leigh who did all of the organising. I just chaired the meeting, and messed up thoroughly by forgetting to record Amber’s talk. Very sorry, everyone.