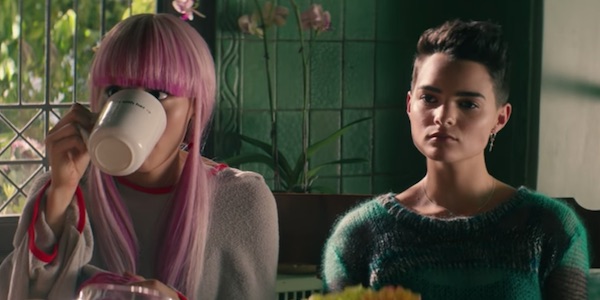 Unsurprisingly, Deadpool 2 is a steaming heap of dingo poo with far less self-awareness than the average Internet troll, at which market is it clearly aimed. It does have some good stuff. The DC joke was actually funny. Domino is awesome and clearly needs her own movie, though of course she is unlikely to get one. Also we have our first glimpse of Teenage Mutant Lesbians, neither of whom get killed off. Indeed, while the cis, white women in the film have life expectancies in nanoseconds, the other women escape unscathed. I’m assuming that the scriptwriters didn’t notice this. Otherwise the film is pretty much forgettable.

While I have little to say about the plot, I was intrigued by one small fashion choice. See above. Ellie (Negasonic Teenage Warhead, on the right) is wearing a green and black, metallic-look fluffy sweater. I recognised it instantly. Something very like that was in fashion back in the late 80s, and early 90s.

This being a Deadpool movie, it is pointless trying to fit it into X-Men chronology. We last saw our favorite mutants in the 1980s, but there are sufficient pop culture references in the film to date this one to at least the present day. Also Deadpool knows that Wolverine is dead, which doesn’t happen until around 2024. Besides, why would the film crew spend any time thinking about setting-appropriate fashion choices when they could be writing another dick joke?

I’m therefore forced to conclude that the sweater is there because Brianna Hildebrand owns it and thought it would suit Ellie’s style. But how? She wasn’t born when it was originally in fashion? Does she collect vintage clothing? Or has someone brought it back? If they have, please point me at it so that I can buy one.