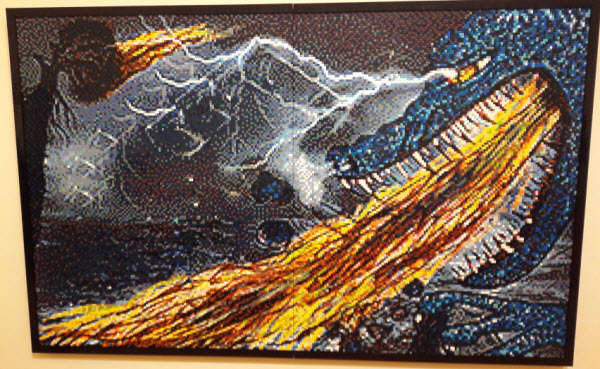 As I mentioned earlier, I took yesterday off. Donna Hanson was in Bath as part of her GUFF Trip (that’s the fan fund for taking fans from Australia and New Zealand to Worldcon). I offered to pop into town and show her around. She’s seen a lot of Bath before, but there was something going on that I wanted to see, and I figured it was right up her street as well.

The Victoria Art Gallery is running an exhibition called Here Be Dragons. It features dragon art by a number of well known illustrators of children’s books, including Chris Riddell, John Howe, Axel Scheffler and Cressida Cowell. The illustration above is a bad photo (by me) of a LEGO mosaic based on an original piece by Cressida Cowell.

The exhibition also has a companion app that allows kids (of all ages) to hunt dragon eggs around town. The “eggs” as posters with pictures of the eggs on them. The app has a compass that will point to a selected egg, and tells you how far away it is. When you have found the poster in question you use the phone’s camera to prove that you have found it. I was especially interested in this because it uses some of the same technology as I’m hoping to use for app ideas I have.

The exhibition is open until October 8th. It isn’t huge, but it is fun, especially for kids.