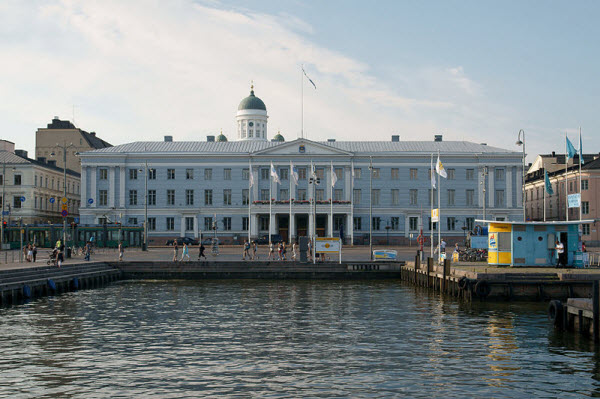 Worldcon isn’t due to start until tomorrow, but this evening a bunch of us were invited to attend a civic reception at City Hall here in Helsinki. Obviously the city couldn’t fit all 6,000+ attending members in, so the convention ran a lottery weighted by contributions to programming. Kevin and I were both lucky enough to get in. There were also fans from Finland, Sweden, Ireland, France, Croatia, Italy, the Netherlands, Canada, Australia, China and doubtless many other countries as well. It all looked very official (and incidentally gave some of us a great opportunity to check in with senior convention staff in a relaxed and informal fashion).

Of course it also made the forthcoming convention seem so much more welcome in the city. Comparisons were made with Winnipeg in 1994 as the last time a city had pushed the boat out for us in this sort of way.

The building now used as City Hall was originally built as an hotel in 1833. The style is Russian Imperial, Finland having been annexed by Alexander I in 1809.

After the reception a lot of people disappeared off to a karaoke bar. I got registered and went back to my hotel because I was very tired day looking around the city. My Fitbit says I did almost 25,000 steps today so I think I have earned a rest. What worries me is that the con hasn’t started yet. Ooops.