On Monday I took myself into Bath in the afternoon for an event that was intended mainly for kids. However, some of us refuse to grow us, and anyway Chris Riddell put in a few things clearly aimed at adults.

The event took place in Bath’s Masonic Hall which is, as you might imagine, a weird-looking place. On the stage there was a throne decorated with arcane symbols. Chris elected not to sit in it, but he did draw himself doing so.

The way Chris does events is a lot of fun. He asks for questions from the audience in advance (written on postcards), then draws randomly from these and finds something to draw to illustrate each of his answers. Several kids went away very happy with sketches he had done for them.

I didn’t put in any questions because I wanted the kids to be able to get the attention, but I did buy some raffle tickets because they were being sold to support Mr. B’s charity of the year, Bath Welcomes Refugees. I had fully intended to put mine back if I won anything, but then Chris threw in the sketches he had done while he was waiting for the event to start. The one of him in the Masonic chair came up and it occurred to me that I would love to win that. And guess what? I did. 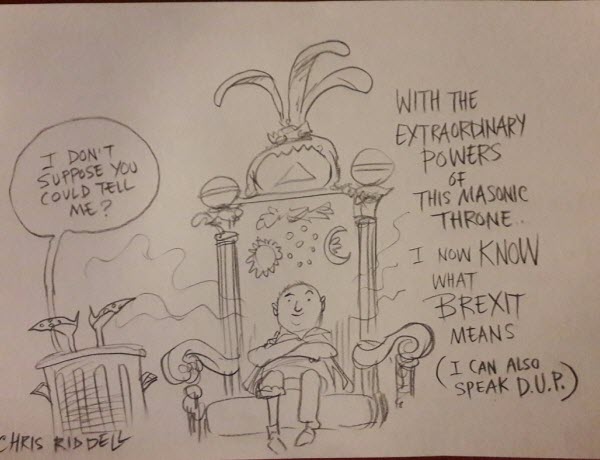 More surprise was to come. The top prize was to have your portrait done by Chris live at the event. It was won by my friend Marjorie, who was delighted to win and even more delighted at this drawing of her as a princess. 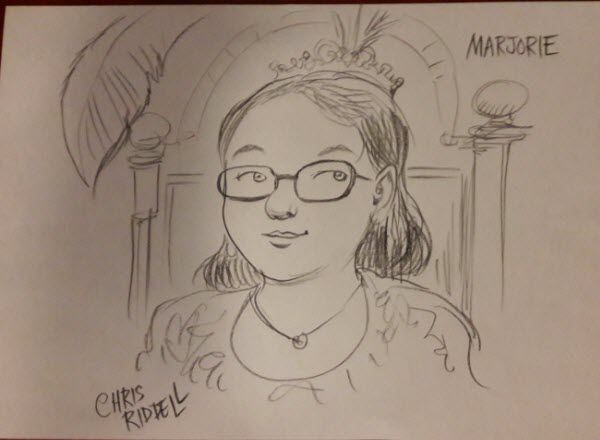 All in all, it was a very successful day. My thanks to Chris and the staff at Mr. B’s.