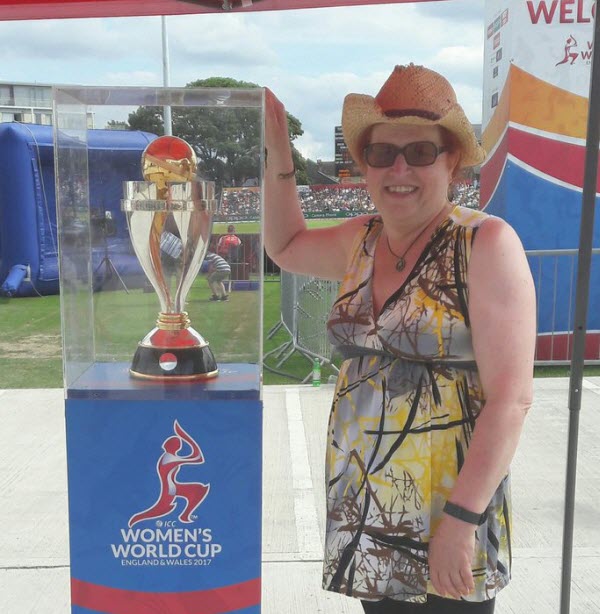 When I last reported on the Women’s World Cup I was looking forward to the game between West Indies and New Zealand at Taunton. It did not go the way I wanted. 150 was a far better score than West Indies managed against South Africa, but the Kiwis knocked off the runs with consummate ease leaving our girls 0-4 for the tournament.

Elsewhere South Africa pulled off a surprise victory against previously unbeaten India. That threw the race for qualification to the semi finals wide open.

On Sunday I took myself into Bristol again to watch England v Australia. There are no more exciting match-ups in world cricket than that, and I had been touting this one as the game to watch from the start of the tournament. I had no idea how right I was going to be.

England won the toss and elected to bat on a wicket that had been full of runs in the past, and with a warm sun beating down on them. When Sarah Taylor was batting runs seemed ridiculously easy to come by, but when she was out for a rapid-fire 35 off 33 balls things slowed down. Heather Knight threw her wicket away trying to go too fast too soon. Tammy Beaumont dropped anchor to steady the side but then was out for 49 to a ball I still think should have been called a no ball for height. It was left to Catherine Brunt and Jenny Gunn to drag the score up to something respectable, which they did very well.

England finished on 259. Chatting to Lisa Pagett of Western Storm during the interval I opined that we were quite a few runs short. She agreed. Australia were capable of chasing a target like that.

Nicole Bolton and Beth Mooney got them off to a good start but then got got out trying to accelerate. Meg Lanning and Ellyse Perry also got themselves well in, and it seemed only a matter of time before they started to raise the run rate. Then, surprisingly, Lanning was bowled by Alex Hartley for just 40, a failure by her astronomically high standards. There was still plenty of batting to come, but Perry went back into her shell and the required run rate began to climb. With 10 overs to go Australia were 14 runs behind England’s pace and the required rate was above 9 runs an over.

Perry, inevitably, began to score faster. With 4 overs left to play, Knight brought back Catherine Brunt to stem the flow of runs. It worked. She dismissed Alex Blackwell and Perry in the same over. Panic set in among the Australian batters and more wickets tumbled. It all came down to Jenny Gunn needing to bowl her final over for less than 16. Then her final ball for less than 6. She got the job done, and England won by just 3 runs. The crowd (in which I include myself) went wild.

England’s performance wasn’t perfect. There were a couple of dropped catches in the field that would have made their lives easier. Catching is, of course, hard, especially without gloves. Vernon Philander dropped an even easier one at Lords in the test match the same afternoon. England’s ground fielding, however, was exemplary. Heather Knight, patrolling the covers, must have saved at least 15 runs turning sure boundaries into singles. This was definitely a case of defense winning matches, and it had the crowd on the edge of their seats for the final hour of the game.

England and Australia both have two games left to play and need one win each to be certain of a semi final spot. Australia play India at Bristol tomorrow, and South Africa at Taunton on Saturday. Neither game is a foregone conclusion.

England play New Zealand at Derby tomorrow, which will be a very tough game. Then they play West Indies at Bristol on Saturday. On past form that should be a win, but as far as West Indies are concerned Bristol is as close as they have to a home match. Also they have run into some form.

On Sunday West Indies played fellow stragglers, Sri Lanka, at Derby. They made a fairly respectable 229 thanks mainly to 46* from Trinidad’s Merissa Aguilleira. Spin Bowler Anisa Mohammed disposed of the core of Sri Lanka’s batting order and West Indies won by 47 runs.

Today West Indies were back in action again at Leicester. Put in to bat by Pakistan, they racked up an impressive 285 thanks to 90 from captain Stafanie Taylor and a destructive 104* from Deandra Dottin. Pakistan’s innings was bedeviled by rain interruptions and the match was finally settled using the Duckworth-Lewis method with West Indies clear winners.

There is, of course, nothing that a West Indies side likes better than beating the English. I’m looking forward to another superb game on Saturday.