As Pride events become more and more popular, and more widespread, questions are being asked about what they are for. Are they too commercial? Are they just entertainment for the straights? Do we still need them? Why isn’t there a Straight Pride?

Prior to Bristol Pride, I was on the radio twice. A whole bunch of us got asked onto John Darvall’s show on Radio Bristol to justify the continued need for Pride. That’s not hard. Trans people are still waiting for the government to act on any of the recommendations from the Trans Equality Report (which was published 18 months ago.) The rabidly homophobic DUP are in government. If you don’t defend your rights, you’ll lose them. I was also on Miranda’s show explaining why the supposed 50th anniversary of “decriminalizing” homosexuality is anything but. It took us until 2003 until all of the laws criminalizing gay sex were off the statue books.

Nevertheless, Pride was once again a massive success. We had more room than ever before, and we filled it all up. The Community Tent, where all of the volunteer organizations were housed, was once again a heaving mass of humanity. The infamous gay weather control once again assured blazing sunshine. A fabulous time was, it seemed, had by all.

That did not mean that we all just gave ourselves over to partying. I missed the march due to having stayed home to watch the Lions game, but I understand that at one point, when they were held up by something or other, some students from Bristol University took the opportunity to stage a little protest and explain why Pride is still important. Part of that included reading the current Trans Remembrance List. Good for them.

I spent much of my time behind the main stage with the Shout Out crew. They have so many volunteers now that they don’t really need me, but I like to get on air during the broadcast to remind listeners that Ujima cares about Pride too. I wasn’t terribly interested in most of the acts, but I did want to get to see Jordan Gray and I’m glad I did.

I know nothing about talent shows. I never watch them, and mostly I have no idea who any of the winners are, let alone the contestants. However, many of the trans folks I follow on Twitter were very enthusiastic about Jordan, who appeared on a show called The Voice last year. She made it through to the semi-finals. That has got her numerous invitations to appear at Prides.

Jordan began her set by introducing herself. It went something like this. “You have probably heard that I’m transgender. If you don’t know what that means, it means that I used to be unhappy, but now I’m happy.” That’s a brilliantly simple and clever line, and I will doubtless steal it at some point.

What I won’t do is follow her example of proving the point. Jordan has a perfectly good female singing voice. But she’s a fan of Johnny Cash and did a couple of covers, including occasionally dropping into the Johnny Cash voice just to prove that she could. No way am I doing anything like that in public. The crowd loved it, though. 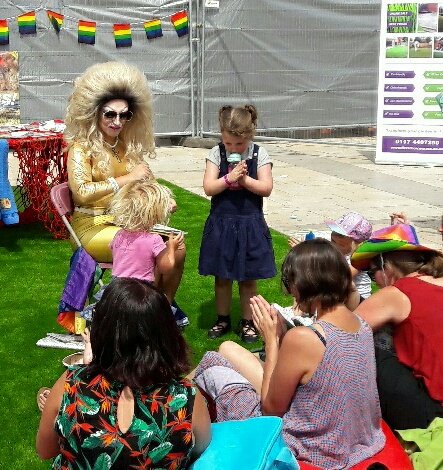 Out beyond the main stage there were load of younger people in evidence. Freedom Youth and Mermaids ran a Young Person’s Area. And there was also a Family Area for the littlest attendees. To keep the kids happy, a bunch of drag queens were telling stories. I donated a copy of Marcus Ewart’s 10,000 Dresses. I hope it went down well.

By mid afternoon the venue was so full that the security team had to put a temporary stop on people coming in. Late comers were understandably peeved. There were a lot of seemingly straight people at the event. I even saw one idiot sporting a Straight Pride t-shirt. But then again, some of the straights were there with a purpose. I spent a bit of time on the OutStories table and while I was there we were approached by a middle-aged couple looking for Mermaids because they wanted help to support their trans child.

The thing is that with an event that size you can’t have it all go the way you want. There were no major disasters, and for that Daryn, Freddie and their team deserve huge congratulations. That evening at the official after party I am being told that the security staff were operating a very strict binary gender toilet policy, which is very much not Pride policy but you never know when some random security guy is going to decide to invent rules so he can throw his weight around.

Is Pride getting overrun by straights? Not exactly, it is still extravagantly queer, but it is a great party and loads of people will come for that. Do we still need it? Absolutely. Does it bring out the worst in some people? Sadly yes. But all of the bad stuff gives you opportunities for teachable moments. Right now I think Pride is still doing good work.

One thought on “Pride In Action”