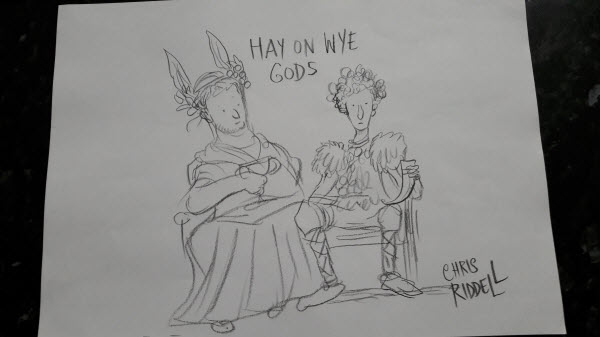 Yesterday at the Hay Literary Festival Neil Gaiman and Stephen Fry did an event about mythology. Neil talked about his hugely successful Norse Mythology book, and Stephen about a forthcoming book on Greek Myths. As a special bonus, Chris Riddell sketched live during the event. The 1700 audience (which included Tony Robinson) was enthralled.

What you might not know is that the legendary Midas was said to be king of Gordium, the same city where, years later, Alexander the Great cut a great knot. Gordium is in Phyrgia in central Turkey, which is also the home province of Cybele.

At the end of the event Amanda read Neil’s poem, “The Mushroom Hunters”, which is about how women invented science. This was apparently a request from Stephen who had seen the original reading on Brainpickings.

Neil did a four hour signing after the event, which meant that he missed Amanda’s concert. I went to the gig, which was great. More of that another time. After Amanda had finished, I managed to catch up with Neil who was finally getting time off to eat. As we were chatting, Chris came up with his stack of sketches from the talk. I asked if I could photograph them. The light wasn’t great, and all I had was my phone, but if you’d like to see the sketches you can find them all here.