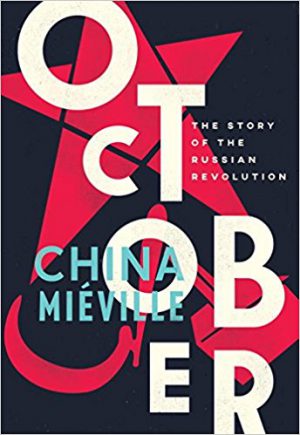 On Friday evening China Miéville was in Bristol to promote his newly published history of the Russian revolution, October. Naturally I, and many of the Bristol SF crowd, where there to see him, even though he barely mentioned SF.

Despite his background in academia (he has a PhD in Marxist theory of international law from LSE), China has written this book using his novelist brain. There are, he says, no footnotes. This sounds like a smart move. Popular history, that is history made accessible to the general public, sells very well. Also, by focusing on people and events, China will hopefully dispel the fear that his book might be full of Marxist theology, debating which comrades have the right to dance on the head of a pin and which should be executed as traitors. While some description of the disputes and demarcation lines between the various factions that created the revolution is inevitable, I trust China not to make this a work of hagiography or demonology.

One of the reasons that China gave for taking this approach is that he has a truly remarkable story to tell. Indeed, he joked that if it he had presented the plot as a novel he might have been told by his editors that it was too fantastic, even for him. Personally I am not surprised that the revolution was kickstarted by a women’s strike. After all, the French revolution was kickstarted by the women’s march on Versailles, and the Stonewall riot was begun by trans women. When it comes down to actual revolution, as opposed to just talking about it, it is always those who have nothing to lose who throw the first stone. However, some of the stories that China has found in the letters from revolutionary soldiers to the party leadership sound really interesting. I wish I had time to read the book, but of course I have a huge pile of Tiptree reading to get through.

Despite our politics often being seemingly poles apart, China and I tend to find ourselves agreeing on quite a lot. He made a point during the talk of distinguishing between those liberals who actually adhere to the principles of Liberalism (“a political philosophy or worldview founded on ideas of liberty and equality” according to Wikipedia) and those who simply support the instruments of the so-called Liberal state. He also thinks a lot about his politics. One of the questions he was asked was whether he thought it was inevitable that the revolutionaries resorted to terror tactics. His lengthy answer covered the fact that the Whites used terror tactics too, that in such situations terror may well have been inevitable, and that this doesn’t mean we should glorify it. I might have added that the original suffragettes did a lot of things that would be counted as terrorism today.

China’s view of the success and failure of the revolution appears to be (on a very simplistic level which I am sure is addressed much more deeply in the book) one of Lenin v Stalin, and in particular Stalin’s disavowal of the project of internationalism in favor of building a Communist state in Russia. You can read more about his views, both on that and on why the story of the Russian revolution is still relevant today, in this Guardian article.

On Friday he also talked about the tension between those who feel that revolution is necessary, and those who prefer to work within the establishment for what they presumably hope will be a more peaceful transfer of power. That reminded me a lot of Ruth Hunt’s comments on Wednesday about how the previous regime at Stonewall adopted an assimilationist approach to LGBT rights, emphasizing that gays were people “just like anyone else” and eschewing anything deemed too outré (such as trans people). China, of course, is a revolutionary by inclination, and these days who is to say that he is wrong? I certainly accept his point that “revolutions always eat their children” is a trite and simplistic slogan, not a natural law. On the other hand, the more chaos a revolution generates, the easier it may be for someone to sell the need for Strong and Stable Leadership.

I note in passing that internationalism is a core belief of the pro-EU movement in Britain today, and that some of the Labour support for Brexit appears to be based on the idea that revolution will be much easier to achieve in a small and isolated country than in the EU.

Politics can be really complicated.

It occurs to me, however, that most of you didn’t want me to talk about politics, you wanted to know if China has any fiction in the pipeline.

Before I get to that, there was brief discussion of his fiction during the evening. His interviewer asked whether there was any connection between his interest in fantastic fiction and his politics. China very wisely pointed that while he might be in the part of a Venn diagram that overlaps those two obsessions, the two circles are by no means congruent. Beyond that he would not commit, so allow me to propose a thesis.

Science fiction is often, though by no means always, about future history. The philosophical project of SF is to examine technological change (and other factors such as alien contact) and examine how that might change the world. Fantasy is often used to examine social issues through a framework of an alternate world (Juliet McKenna being a good example of this). Both of these things are of obvious interest to historians. And politics is, at least in part, the art of applying historical knowledge about how human societies work to try to create a better future.

As to new books, China told me that he does have a novel he is working on. However, October has eaten up two years of his life, and now he is on a book tour. He needs all of that to be over before he can get back to being a fiction writer again.

There wasn’t a lot of time to chat after the event because China had to catch a train back to London. He was, of all things, appearing at Blackwells in Oxford the following night. (That would be the bookstore with the famously pro-UKIP owners.) However, we did manage a brief catch-up. China, if you are reading this, I have checked out your pal and have read this. It seems pretty good despite the potentially incendiary headline, but he does need to think about trans identities outside of the modern Western cultural bubble.