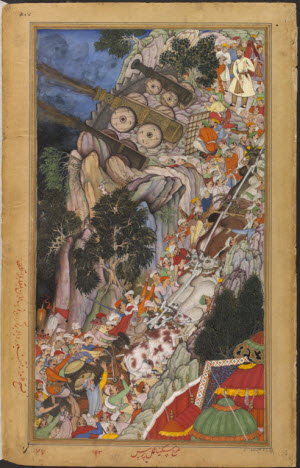 I spent most of today at the Victoria & Albert Museum in the company of some of their volunteer tour guides, in particular my friend Dan Vo with whom I have worked on various LGBT History projects. I was there to talk to Dan and his colleagues about trans terminology, and how to represent trans people in a respectful and authentic way when talking about them during LGBT-themed tours of the museum. We also took the opportunity to have a look around some of the galleries to see if we could spot some trans-themed exhibits. I’m pleased to say that I found a few. Nothing on quite the scale of a Grayson Perry Vase depicting April Ashley, which has to be their prize exhibit, but I was pleased with what I found.

I also found a mystery, which I’m going to talk about here. The picture to the left is in the South Asia gallery and is one of a series depicting the conquests of the Mughal emperor Akbar. It shows bullocks pulling cannon up a hill to attack the fortress of Ranthambhor in Rajasthan.

Most of the characters in the scene are depicted with facial hair, either mustaches or full beards, and they wear turbans. But my eye happened upon one character in the painting who is clean-shaven and is wearing what looks to be a more feminine style of head covering. 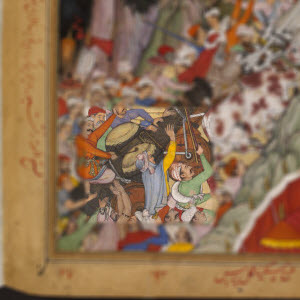 I know nothing about Mughal art, but I do know that hijra were common at the courts of the Mughal emperors. (They were, for obvious reasons, used in the harem as guards and servants, which gave them a place of honor in Mughal society.) So I am now wondering whether the artist has chosen to depict a hijra among Akbar’s army. Dan is going to make inquiries with the museum staff for me to see if anyone knows anything about this. If anyone reading this is an expert on Mughal history, I’d love to hear from you.

At the end of the day I got to see Dan in action doing one of his guided tours. The V&A has a wealth of LGBT+ material and Dan is very knowledgeable. If you happen to be in London on the last Saturday of a month I recommend popping along. You may even get to hear one of the guides talk about an item I found for them. Though of course the tours can’t be too long, there are several depictions of Roman emperors, and I could talk all day about them. Dear Goddess, Tiberius, what were you thinking?