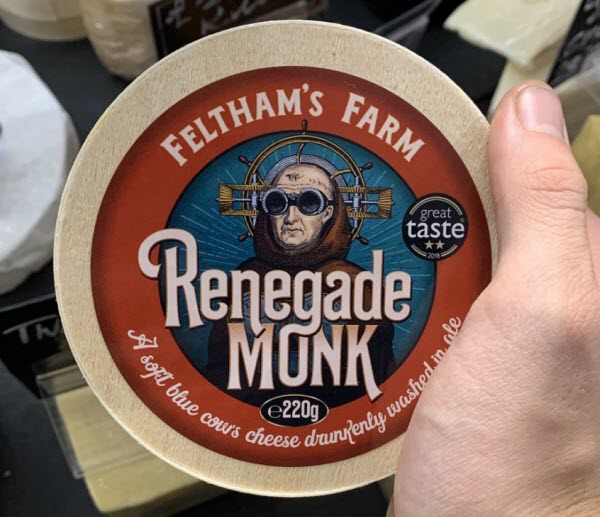 As is my wont, I bought a large quantity of top quality cheese to see me through the holiday season. Some of it you will be familiar with from my past posts: Stichelton and Gorwydd Caerphilly. The Gorwydd, by the way, finished 11th in this year’s World Cheese Awards, which pleases me greatly. But there are others that deserve a mention.

This year’s goat’s cheese is Ragstone, made by the folks at Neal’s Yard Creamery. It comes as a fairly firm log, but will soften up with time. Mine is still firm in the centre, but quite gooey around it. It has quite a strong taste for a goat’s cheese. I’m very pleased with it.

As you’ll see from the above picture, Renegade Monk now has a splendid new steampunk-like packaging. Its taste is every bit as robust and uncompromising as usual. It gets eaten last, despite being a soft cheese.

This year’s discovery is Gallus. How could I possibly resist a cheese with that name? It is Swiss, and made by Affineur Walo who are also responsible for Red Wine Farmer. Gallus is not named after the devotees of Cybele, but rather after the Swiss town of St. Gallen. The original saint was Irish and a close companion of St. Columba. Given that he was called Gallus, I think it entirely likely that he was a eunuch. The abbey in St. Gallen is famous for having been home to St. Wiborada, the first woman to be formally canonized by the Vatican (thank you, Pope Clement II).

Sorry, I digress. The cheese is a Gruyére, and looks like it might be one of those tasteless continental cheeses we are used to. It isn’t. It has a strong, nutty taste. What’s more, it finished 7th in this year’s World Cheese Awards.

The usual warnings apply. These cheeses are made from unpasteurised milk and are not recommended for pregnant people and anyone else particularly at risk from bacteria.